Alexi Conman went to Leeds' Thought Bubble convention and bought a substantial quantity of quality small press gear - but other than catching a smidge of Roger Sabin's talk on the roots of academic analysis of sequential art (plus a pictionary type thing in a bar later on that he couldn't see properly), he didn't make it to any talks/panels at all. LOSER!

That said, he thoroughly enjoyed himself. The lovely people of Newcastle's Paper Jam collective were across in force, as were many other folk unfortunate enough to have made the acquaintance of Alexi, and rather a lot of gabbing occurred.

The gargantuan main hall seemed even more packed than last year and the vibe was again incredibly positive, with few commercial dealers (i.e. those selling backissues, toys etc) and a plethora of small press stuff that hadn't been at other cons - hence the extensive pile of wonder that Alexi bought.

Why should this be, compared to other cons? Possibly:

(b) It's one-day - although there are events on other days around it, the main con is a single day, so it packs everything in efficiently, meaning that the costs don't have to cover the use of the venue for so long, and the punters will all be there on one day, getting all their purchasing done in one go. This leads to...

(c) Affordable table rates - most folks seemed to have at least broken even.

(d) A more arty small press ethos? - this year, the more highbrow panels had been moulded into a linked but slightly separate conference on comics academia (which Alexi was most disappointed not to see more of) and the workshops that surrounded the main con seemed to encourage that sense of creativity over pure fandom.

(e) Christmas - perhaps people are just in the mood for buying a bunch of comics?

Anyway, Thought Bubble really showed how much could be packed into one day... even if Alexi didn't really make best use of it himself. 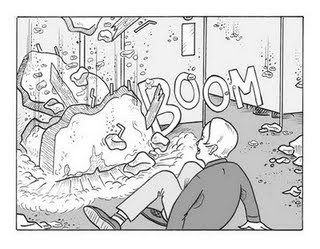 The prodigiously talented (and depressingly youthful) Jack Fallows is set to release the first issue of his possibly three-part saga, The Big Bang, at Leeds' Thoughtbubble comic convention.

Alexi Conman provided some minimal editorial assistance to Mr. Fallows in this project (basically just offering him ill-considered suggestions and ungrounded analysis throughout the creative process) but entirely without bias recommends that anyone in the market for a blackly comic look at human foibles, arty and offbeat but unpretentious, with a vaguely Dan Clowes kind of vibe, will thoroughly enjoy this excellent comic.