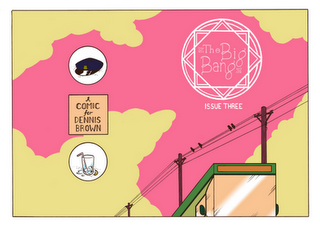 Alexi apologises for being somewhat late in reporting this, but the third issue of The Big Bang (a brilliant comic series by Jack Fallows that Alexi provides vague assistance with) was released at Thought Bubble. Alexi was really pleased with how it turned out. It's just a little stand-alone story examining a life spent trying to make sense of the incomprehensible. More info on Jack's blog and you can purchase it (and the first two issues) easily via Jack's Etsy shop.
Labels: shameless promotion

So, anyway, Alexi Conman organised a comic festival. Well, it was a little one. And 'curate' is perhaps a better word. And he had a lot of help. But still.

It was a one-day free event held at Newcastle City Library, it had a bit of everything - big names, small press, talks, panels, workshops, activities for all ages. You can check out more info over at the Canny Comic Con blog.

Alexi has mentioned this in various places already but to reiterate: it was a great day, lovely welcoming vibe, everyone seemed to have fun and it was thanks to the cumulative efforts of everyone who was part of it. It was all organised with zero money and Alexi is very grateful to all the people who gave up their time to get involved.

One final thing he'd like to point out is that you can do this. Newcastle had been a keen candidate for some kind of comics festival for some time (the last big comic event there was NICAF back in 1996) and it was just happenstance that the person who seemed to know the right people (or rather knew the right people that knew the right people) was antisocial idiot Alexi Conman. But it seemed like it needed doing so he asked people, and everyone was super-nice and supportive and keen, and after much planning and working out of things, it happened.

It is possible. Even if right now you've got no connection to anyone else in comics, just take things one step at a time. Try and get in touch with other enthusiasts in your area and form groups for reading or making comics (like Readers of the Lost Art and the Paper Jam Comics Collective). Start going to other big conventions around the country (there are more and more every year - check out the Comic Conventions listing), meeting people. Get in touch with awesome helpful people like your local library. Send six hundred emails. Then bang, you've got an event. And it doesn't even need to be that complex. Just start finding ways to celebrate anything about comics - because they're great and if you don't celebrate them, who will?
Labels: conventions, not just scriptwriting
Newer Posts Older Posts Home
Subscribe to: Posts (Atom)