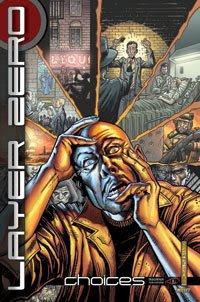 Alexi Conman is fairly chuffed to find that stories that he's scripted will be appearing in TWO books being released at the Bristol Comics Expo. As well as Accent UK's Western anthology (mentioned previously), Insomnia Publications' latest Layer Zero anthology, Choices, will be unveiled at Bristol too. Wooha!

'Red Wire, Blue Wire', a five-pager with awesome art by Larry Watts, will be in amongst a whole load of other awesomeness being showcased in this fine collection. For anyone who may be attending Bristol, Insomnia are doing special convention rate deals on many of their books, you lucky lucky people.

Insomnia have really come hurtling into the UK independent comics scene over the past year or two - as well as Choices, they've got a highly anticipated new graphic novel coming out at Bristol (Cancertown, featuring an intro by Bryan Talbot) and a really substantial slate of projects coming soon, so keep an eye out for them. Their website is currently under reconstruction but check out their blog for all the latest info.
Labels: incoming
Newer Post Older Post Home