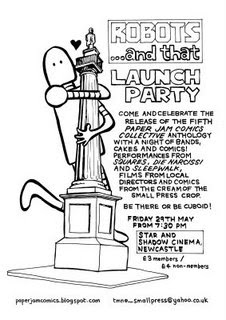 Although Alexi Conman intends that this blog be focused on his comics scriptwriting endeavours, he feels compelled to mention some other related activity which occurred recently.

For Alexi, being in the process of developing unstoppable scriptwriting mad skillz of thunderous prowess is not enough! He is also occasionally developing shambolic drawing crap skillz of inept mediocrity - and some of the products of which feature in the otherwise excellent small press anthologies of the Paper Jam Comics Collective.
They recently released their fifth anthology (Robots... And That) and celebrated with an awesome launch party, with bands, films and cake. There's some real talent in the group (see the very cool flyer design above, by Bainbridge and Waugh), and giant leaps forward are being made with each release. Marvel and DC will be in their sights soon!

In other slightly off-topic news, some of Alexi's short films are looking like getting screened at various places, including at the Glastonbury Festival. Woop!
Labels: not just scriptwriting
Newer Post Older Post Home