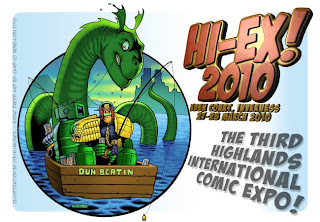 Whilst hardly a convention veteran, he has been to quite a few now (reviews of several are noted elsewhere on this blog) and whilst they all have their own strengths, this really was one of the most enjoyable weekends in Alexi's con-going experience.

Why was this so? Although not huge, the exhibitor room had plenty of great stuff for sale and Alexi picked up a nice little stack of new small press gear. All the events that Alexi went to were great - the auction and raffle were fun (though just as last year, Alexi got nowt - "epic fail" as youngsters apparently say), the Scottish Falsetto Sock Puppet Theatre performance was as mental as it sounds, and the 'serious' panels/workshops were really insightful and interesting.

The 'writing comics' workshop predictably turned up a range of useful tips across all aspects of writing for comics from script style to the nature of the industry. The 'online comics' panel investigated several models of online comics publishing and the ways it can be used in tandem with print publishing to make it a viable option for creators. The 2000AD panel, rather than being a publicity event (which publisher-themed panels sometimes are), turned into a really interesting discussion of the history of this British institution and the ways the comic market has changed over the years. All the guests were lovely people and great to listen to.

However, what made it such an enjoyable event extended beyond the quality of the 'event' itself, it was in all the additional details: the highland setting (the fresh air, the hills, the river...), the ethos of the organisers to have a major charitable focus, the British flavour to it all (there was much more interest in 2000AD than Marvel or DC), and, most of all, the way it was so inclusive and social throughout. Chatting late into the night in hotel bars is a fairly integral part of most comic conventions but Alexi has never found one to be so friendly and open to all. Perhaps partly by being slightly smaller than some other cons, but mainly through the attitude of the organisers and everyone attending, it was a really lovely atmosphere, and spending an evening in the hotel bar doodling draw-a-panel-pass-it-on jam comics (of a puerile and preposterous nature) with good, slightly drunk, people (including renowned comics professionals) was an absolute delight.

Alexi is too lazy to mention and thank all the nice folks that he blathered at, but he feels that mention must be made of a group of 2000AD fans who made an epic 1300-mile minibus round-trip, dubbed the 'Hi-Ex Hell Trek', an endeavour of admirable grit that is a perfect example what made Hi-Ex 2010 such a brilliant convention.
Labels: conventions
Newer Post Older Post Home