It's time for a bit of info regarding Zarjaz #12, which is out now and includes the story 'Fat Chancers', written by Alexi Conman.

If you're not already aware, Zarjaz is a 2000AD fanzine comic anthology. However 'fanzine' is perhaps a little misleading as Zarjaz has been Eagle-nominated (for 'best British black & white comic'), and as well as featuring some of the best small press and indie comic creators from the UK and beyond, it often also features material from establised pros who've worked on 2000AD itself. For example, issue 12 features work by Alex Ronald and Liam Sharp, along with many other superbly talented folks, so Alexi was pleased to be in such esteemed company.

Alexi's story features Dredd-alike 'Judge Dury' investigating some corpulent criminals in a daft two page story with perfect art by Luis Chichon (see below, and check out a little before/after taster of the strip on Luis' blog). 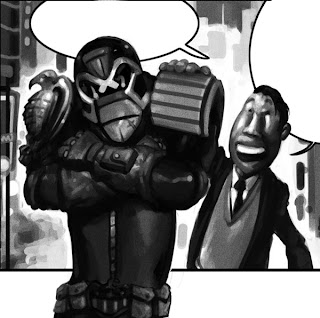 There's a link round-up for the issue on The Quaequam blog and it's reviewed twice on the ECBT2000AD blog (here and here) and in episode 61 of the ECBT2000AD podcast. Alexi was delighted to find that the reviewers seemed amused by his silly little story and impressed by the comic in general, so Alexi suggests that you may like to purchase a copy here.