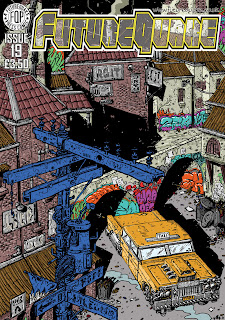 This weekend will be Leeds' Thought Bubble Festival comic con, now even bigger and spread over two days. Alexi Conman will be there. If Alexi sees you, he will likely urge you to buy some or all of the new publications that he has contributed to, including Zarjaz #12, Accent UK's Predators anthology and the hot-off-the-press FutureQuake #19 (cover by Michael Byrne).

You can get a full overview of the issue here. It includes two stories by Alexi (TWO! It's like an Alexi Conman special! Well, not really!). These are: 'Little Things' with art by Mike Bunt, and 'Scientific Progress Goes Bosh', art by Andrew Chiu. Alexi was really pleased with how both stories turned out (one's quite creepy and one's quite daft, he leaves you to guess which is which), the art in both is excellent, and Alexi hopes the FQ readers dig them. 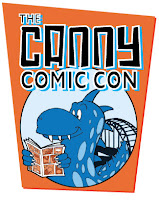 In other news, against all rationality, Alexi himself seems to be organising a little comic festival. If you're going to be anywhere near Newcastle on 10th December and have any interest in comics, you should definitely learn more about the Canny Comic Con.