The final round of Eagle Award voting is now open (until 2nd April). Two comics featuring the work of Alexi Conman have made the final list of nominations!

FutureQuake and Zarjaz are both nominated in the the 'Favourite British Comicbook: Black and White' category, and since Alexi scripted 'Little Things' and 'Scientific Progress Goes Bosh' in FutureQuake #19 and 'Fat Chancers' in Zarjaz #12, he is pretty chuffed (particularly with the FutureQuake nod).

Now, there's a lot of talk that the awards maybe aren't representative of comics in the UK, and Alexi normally has a lot of time for that point of view and would gladly discuss what form something celebrating the diversity of British comics could more helpfully take and the pros and cons of fan voting and so on and so on - but currently he doesn't care BECAUSE HE GOT NOMINATED WOOHOO.

Anyway, if you haven't already, Alexi suggests that maybe you should take these nominations as evidence that you should purchase these fine comics and read them as soon as possible.

Incidentally, Alexi has been in an award-nominated anthology before.

In other news, Alexi was at the Cardiff International Comic & Animation Expo. 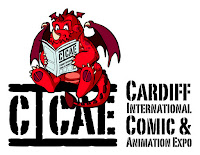 He was mainly helping flog Into The Woods, which went very well, and it was nice to chat to several of the creators involved. He did manage to catch the 2000AD mega panel - which with nine guests and two hosts was the biggest comic con panel he'd seen, but it was also a great good-humoured and enlightening look at how the creators themselves see the Galaxy's Greatest Comic on it's 35th birthday. He also indulged in the usual drunken-ish chatter with many superb people and thoroughly enjoyed himself.