Indie anthology rises from the flames but needs your help to survive! 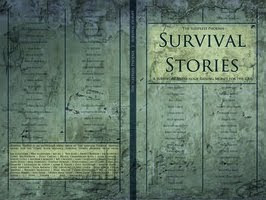 They'd put out some really good books, including the Layer Zero: Choices anthology, which includes a story scripted by Alexi. There were a lot of talented up-and-coming creators involved with the company and having met quite a few, Alexi found them all to be highly capable, professional, and enthusiastic, so he considers it all a particular shame that the venture collapsed.

Whilst the creators who had graphic novels in the works have the unenviable task of negotiating the return of the rights to their work, there is one project that is already rising from the proverbial flames. The next anthology book was, coincidentally enough, going to be 'survival' themed, so it's perhaps fitting that the creators involved have banded together as the 'Sleepless Phoenix' collective to keep the project going and publish the anthology as Survival Stories. Alexi has scripted a story that will be appearing and thinks it looks like it's shaping up to be a dang fine book.

If the heroic journey to bring the book together and the fact that it's full of quality sequential art including new Alexi Conman work isn't enough to interest you, it's also extra worthy as all profits will be going to the Comic Book Alliance (a UK organisation who, despite the use of Comic Sans on their website, seem noble-minded folk with aims like helping comic creators in legal disputes, promoting comics, running education projects and suchlike).

However, printing requires the dollar dollar bill y'all, and to that end, Sleepless Phoenix have set up a pledging page, where, basically, you can pre-order the book, and if they get enough pledges, the book gets printed, huzzah! For less than a tenner you get the anthology (nearly 200 pages of comics), alternatively, if you're a high-tech comic reader you can get a digital download of the book for just a few quid, or, if you're feeling flush, pledge larger amounts and get super spiffy extra shiz like sketches and undying gratitude.

So Alexi would urge you to investigate this, not for his sake, but for your own - because it's going to be a pretty tremendous book! Check it out HERE.
Labels: incoming, shameless promotion
Newer Post Older Post Home