This weekend was the British International Comics Show 2010 and Alexi Conman was there.

The launch party wasn't particularly spectacular (all launch parties will pale in comparison to BICS 2008 which had free food and comics industry musical entertainment!), but it had a good vibe and everyone seemed to have a good yak on.

The thing that has made BICS stand out in the past was the quality of the panels, and although nothing quite stood out for Alexi this year as being unexpectedly amazing, there was still plenty of quality.

Perennial favourite panels 'Comic Artists Flip Out' and 'Have I Got Comic Book News For You' both returned this year. Flip Out offered an opportunity to watch Alan Davis, Staz Johnson and Nicola Scott doing massive high-speed sketches on flip-pads (with a chance of winning them as they're were completed) and although Alexi didn't win anything (booo), he enjoyed it. Equally entertaining, in a more absurd way, was HIGCBNFY, which offered a fairly unique opportunity to see respected comic industry pros engage in a quiz that involved, among other wackiness, identifying different Superman crotches. Alexi doesn't feel that any description can really expand on that.

Alexi also caught several panels with some big names talking about their work. The first of those was Bryan Hitch being interviewed by the Geek Syndicate (well, Barry and supercool stand-in Stacey Whittle of Small Press Big Mouth). Alexi found the interview really insightful and interesting, covering many areas of Hitch's comics career including early influences, working methods, amusing anecdotes and planned projects.

Hitch was promoting his new 'how to' book (which looks excellent) and Alexi found it really refreshing to hear a man of such obviously accomplished technical artistic skill reinforce the message that the main thing comic art needs to do is tell the story.

The whole interview is available to listen to on the Geek Syndicate site here. Check it out!

On Sunday, Alexi attendend two quite different panels centred on creators, though both were great in their own way.

The first was Charles Vess talking about his work. Alexi could have happily sat for hours watching this. It was simply Vess discussing his techniques and the inspiration behind each piece while images of the work (including comics, illustration, and sculpture) were displayed on a big screen - the guy is cool and his art is almost magically beautiful.

Later, in a somewhat more complicated format, Jonathan Ross talked to Tommy Lee Edwards on the big screen via satellite link, mainly about their book Turf. It wasn't totally smooth, but given the technical complexity, Alexi though it went well.

It was interesting to see Ross in this environment - he was hardly a shrinking violet but was careful to never portray himself as some bigtime star, acknowledging that he was still a newcomer to professional comics and ensuring that where possible the emphasis was on Edwards. Perhaps the nicest thing to emerge during the panel was some of Ross' own earlier artwork.

It's a fairly well-known fact that he's been a lifelong comics fan, but Alexi and most of the audience seemed pleasantly surprised to see that Ross' art (much as he was quite self-depreciating about it) was actually pretty good, and it was clear he'd always had serious aspirations to make comics. Celebrities writing comics (or often, perhaps, celebrities "writing" comics) are nothing new, but Ross really came across as someone who just happens to be a celebrity who is now writing comics. With the mention of some new projects appearing down the line, it will be really interesting to see how his career progresses.

The various stalls and small press outlets were busy as always and Alexi picked up a nice selection of new gear. Some highlights of new cool stuff at BICS included: the final (thirteenth) issue of Paul Rainey's epic No Time Like The Present and the big collected book of Sgt Mike Battle.

However, Alexi was most pleased at seeing some of his own work fresh in print. 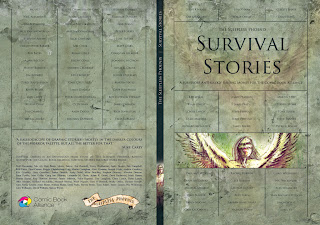 The Sleepless Phoenix Survival Stories anthology (mentioned here previously) was hot off the presses for BICS. It's a big comics anthology of stories with the theme of 'survival' interpreted in all manner of ways. Alexi hasn't had a proper chance to read it yet, but it looks great.

Alexi's story is called 'The Future Is Not Set In Stone', and was drawn (awesomely of course) by Monty Borror. It's kind of about social responsibility, the weight of history, the changing nature of society and suchlike. Anyway, Alexi assures you that it's great.

If you are thinking "my, this sounds an excellent book, I would like to purchase it" (as Alexi is sure that you are), keep an eye out for it - it will be available at various comic cons and fairs and things in the near future.

Anyway, back to BICS. As always, Alexi hung out with many lovely lovely people to whom he sends his warmest regards, his congratulations on their comic-related endeavours, and his apologies for whatever inane gibberish he spouted at them.
Labels: conventions, shameless promotion
Newer Post Older Post Home