An Even Bigger Bang 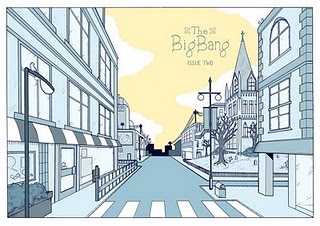 Alexi assists (or hinders) Jack with this comic with a little bit of writing, editorial suggestions and suchlike, and is delighted to see such a fine product, testament to Jack's awesomeness.

This continues the story from last year's first issue and if you are not already familiar with it (why not? Alexi suggests you purchase the first issue from Jack's Etsy shop), it concerns a variety of people dealing with an unexplained event (that may or may not be described as a kind of large bang of some type) and themselves. Oddness! Pathos! Cake!

Alexi assures you that it is excellent stuff and well worth investigating.

And if you are admiring Jack's fine cover image above, then check out his blog where he explains how he made it.
Labels: incoming, shameless promotion
Newer Post Older Post Home