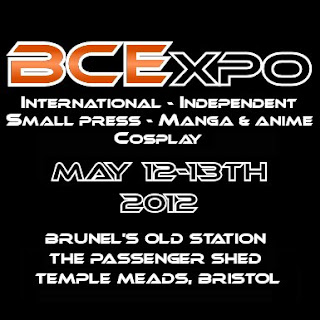 Alexi was at the Bristol Comic Expo at the weekend and thought it would be worth doing a little report about it, since he enjoyed it more than any convention he's been to for ages.

There were several notable factors coming into the Expo this year: there had been a bit of shuffling around of the folk running the event, the main exhibitor room was back in the big hall beside the train station after three years away, and Bayou Arcana (a book that Alexi had scripted a story for) was launching.

In many ways, it wasn't massively different from previous years, but a lot of little things, mainly by luck, cumulatively made it very enjoyable for Alexi.

The new layout of the Expo was certainly pleasing. Having the majority of the exhibitors in the 'Brunel's Old Station' hall (as they had been on Alexi's first vist to the Expo, in 2008) was much better than cramming them into various rooms across two hotels. The hall (or shed as it's generally referred to) is a large, light, airy room, which meant more space to wander around and a more satisfying browsing experience for Alexi as a punter. Combined with the fact that there seemed to be many exciting new books on sale and a high level of quality across all the publications on show, the result was that Alexi came away with a massive stash of new comics.

The talks and panels in the Ramada hotel round the corner also benefitted from the extra space afforded by being separated from most of the exhibitors. It made the environment more pleasant (quieter, cooler, less stinky (except when Alexi was around)) - and there was a pretty solid programme to get stuck into to - more of which shortly.

Of course, also high among the positive factors was the usual social element, and despite his neanderthal grunting and terrifying visage, even Alexi had a great yak on with many excellent folks in the Ramada hotel bar about recent and upcoming projects and comics nonsense in general. There were also various other minutae that somehow contributed to how enjoyable it all was - a particularly comfortable stay at the hotel, the weather being lovely and sunny without being stultifyingly hot, even the catering in the shed was surprisingly good.

Alexi will admit that this general good feeling was enhanced by the fact that although there was still constant bustle, it wasn't quite as busy as in previous years - yes, the layout change helped, but it was also noticeable that there weren't quite as many creators and fans attending. Aside from the economic climate, this can almost certainly be attributed to the proximity (temporal and geographic) of other comic conventions. Kapow is next weekend and MCM Expo is the weekend after - and although Bristol was once 'The' British comic convention, it's now no longer top of the pecking order. Comic creators (of all levels) and fans understandably have limited amounts of time and money and are forced to make choices.

The apparent result, unfortunately, was that some exhibitors found the going a little slow, commercially, in comparison to their costs. This happens after every convention - creators who, for whatever reason, don't do so well - but there does seem to have been a bit of a muttering above the norm. It's perhaps understandable when fans have stated that the reason why they weren't there was that they'd chosen to go the London cons where there may be a greater concentration of 'big names' (particularly those from the U.S.), so the creators themselves end up going where they think there'll be the most fans, and a little bit of a vicious circle ensues.

Much as he sympathises, Alexi didn't have a table and wasn't really aiming to sell anything other than a few copies of Into The Woods, so slightly lower punter numbers didn't trouble him directly (quite the reverse!). In terms of creators, there were still loads, from established pros to small press, and the fact that there weren't, for example, any Marvel or DC editors there wasn't a concern at all.

In fact, a lack of presence from big publishers may have had a positive effect on the panel content. For example, the Expo regular DC/Vertigo panel, which in the past had sometimes perhaps been a little too focused on advertising upcoming releases to fanboys, got a fresh twist as creators Paul Cornell, Ian Churchill and Mark Buckingham were by joined by noted comics bloggers Cheryl Morgan and Stacey Whittle to discuss a broader range of topics than usual, particularly fan reaction to 'The New 52', and it turned out to be free-flowing, relaxed and insightful, with lots of interaction with the audience.

Similarly, the packed 2000AD panel (which can now be heard in its entirety here) seemed to go down well, a really good-humoured and positive celebration of 'the Galaxy's Greatest Comic' that again balanced daft banter and thoughtful wisdom from creator droids.

For the first time in a while, Alexi also stumbled upon an 'unexpected gem' panel. 'Strip for Action' was Mike Conroy hosting John Burns and Syd Jordan talking about their experience working on long-running action comic newspaper strips. It wasn't a genre that Alexi knew much about, but he found hearing these immensely experienced creators talking (about how they got into these comics, their working techniques, the nature of the business, how it changed, and so on) fascinating and very engaging.

There were also plenty of panels with younger creators launching their books and Alexi caught a few of these. Kronos City and Clockwork Watch both came across as interesting projects worth checking out, but of course, the most significant one for Alexi was the Bayou Arcana panel.

Alexi wasn't heavily involved in the development of the book (a lot of which was done on Facebook, which Alexi is not on) so he was happier cheering from the audience. However, a gajillion members of the creative crew did a grand job in both filling the stage and presenting and discussing the book. There was a buzz about the book throughout the weekend and Alexi was certainly impressed with the quality of the finished product, so he's hopeful that there will be plenty of copies being read in the near future. (Alexi even signed a few. But not many. If you got his signature, your copy is SUPER VALUABLE.)

On the topic of producing work for anthologies, Alexi saw a great panel on Sunday morning: 'Anthologies - Telling Tales', which featured Rob Davis, Dave Evans, Richmond Clements, Nic Wilkinson, Stacey Whittle, Barry Nugent and Jimmy Pearson, in a discussion of the appeal and challenges of anthology comics. This included their personal experience as editors, thoughts about the format and tips for anyone hoping to do work in anthologies. Having worked with most of them, Alexi was pleased that they didn't urge people never to work with him.

Despite Alexi's enjoyment of it, the Expo wasn't pefect, there were some things that could have been improved, mostly the usual topics - advertising and signage, admin and ticket sales; plus there was a band on on Saturday night who were pretty decent but way too loud to stay and listen to (Alexi is not an old fogey, the band really were just too damn loud) and again, there was a lack of info about who they were, when they were on, etc.

All in all though, a decent convention which Alexi really enjoyed.

In terms of questions raised about attendance and the tension with Kapow and MCM, Alexi just thinks this: some people may prefer a convention with a guest list that is topped with actors from Doctor Who and stand-up comdedians, at which one has to barge past thousands of morons while looking round tables, but Alexi does not. He doesn't care about people off the telly. He likes a bit of space. It's not to say that he has no interest in Kapow or MCM, he'll probably go to one or both at some point, but considering that Thought Bubble is almost certainly the best organised and most indie-comic-centric of the new breed of rapidly expanding comic cons and Alexi has even found that that has gradually become a bit too sprawling and hectic for his tastes, then Bristol will continue to hold more appeal than Kapow or MCM.

Some commentators have questioned whether there are too many comic conventions around the UK. Alexi refutes this. Horses for courses is what he thinks it's all about. There's scope for a massive range of events of different types and sizes, and it just takes a bit of common sense in scheduling to ensure they're well spaced out.

The trick of course is making sure that they're financially viable for all concerned. If Bristol isn't going to have quite as many visitors as it once did, meaning that creators don't sell as many comics, then reducing table costs (and ticket costs to encourage visitors) would hopefully make it more viable. If the costs of the hotel and shed could not be met with lower table and ticket costs, then there may be a decision to be made - change venue, or try and lure the punters back and get big again without increasing costs.

Perhaps it's about finding an identity. Perhaps Bristol has to choose between trying to fight with the massive multimedia behemoth events or aiming to be the largest of the more UK-comics-oriented middle-size cons (like Cardiff and Hi-Ex). Alexi hopes they choose the latter. If they can replicate the visitor experience that Alexi had, while making it a better experience for the stallholders, then Bristol will continue to have a strong and lasting appeal that other conventions will struggle to match.


** UPDATE: apparently ticket sales (i.e. punter attendance) was substantially up on the last few years. Alexi suggests you take all pontificating about "low turnout", both here and elsewhere, with a pinch of salt! **
Labels: conventions
Newer Post Older Post Home