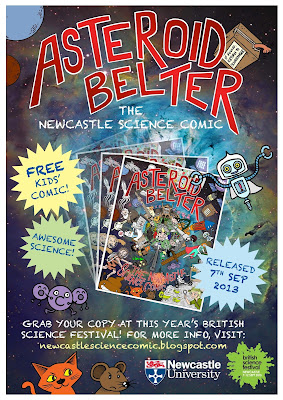 Alexi Conman has spent much of this year thinking about science.

Science is interesting and progressive. Comics are a good way of communicating information. A science comic aimed at 8-13 year-olds produced as part of British Science Festival in Newcastle featuring a stellar list of comics creators collaborating with university scientists - Alexi feels sure that this is an excellent thing. This is what Asteroid Belter is. It looks a bit like this:


The project was put together by North East artsy/comicsish polymaths Lydia Wysocki (Big Boss Ultra-Brain) and Paul Thompson (Technical Wizard), their team of arse-kicking editors (Britt, Jack, Mike and Mike), supported (and funded) by excellent Newcastle University 'engagement' folks, and it features the work of a whole shedload of awesome scientists and comics creators.

A mammoth undertaking to be sure, but the long road is at an end and the newspaper-format anthology is being launched on Saturday 7th September at Newcastle City Library.

The first: The Amazing Monkey With Three Parents
Working with scientist Sourima Shivhare, artist Tony Hitchman and editor/artist Paul Thompson to somehow try and explain the science behind high-profile cutting edge 'three-parent' IVF procedures to prevent mitochondrial disease at a level suitable for 8-13 year olds and within a satisfying narrative framework. MAN, THAT WAS HARD. Alexi thinks that this is probably the most work he's put in 'per page' of any comics project he has worked on. However, in the end, Alexi thinks this 'four-parent artistic process' managed the seemingly borderline-impossible and made the story work.

The second: Colossal Achievement
Artist Sigmund Reimann was keen to make a comic adaptation Prof Brian Randell's true-life story of how he found out about 'Colossus', the world's first programmable electronic computer that no one knew about for thirty years because it was built secretly to decrypt the Nazi's toughest codes during World War II. Alexi helped adapt Brian's presentation into a script for Sigmund, who then did a brilliant job of putting it on the page. The story is fascinating and Alexi strongly suggests you watch Brian tell it in his own words:


Alexi was also involved a little bit behind the scenes of the comic and was constantly impressed with the passion and determination in all areas of this project and was delighted to see the 10,000 copies of the comic finally printed. He urges that you try and get a hold of a copy if you can - it will be given away FREE during Science Week. For more info, check the website. (Alexi also did a little profile thing as a contributor where he tried to sound clever.)