Alexi has been up to several things of late that are probably blog-worthy. 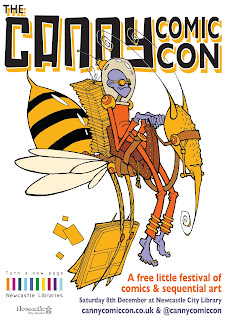 ONE! Alexi organised the Canny Comic Con again. Many many emails, but again it went really well and Alexi was moved almost to tears by the spirit of the comics community creating something good by force of will. He is very grateful to all comics folks involved (particular those who helped Alexi behind the scenes), and to the amazing Newcastle City Library for hosting. More blah will go up on the Canny Comic Con blog soon.

TWO! Top Cow ran an open submission Talent Hunt in the latter part of 2012 which will result in a paid gig for two writers and two artists. Alexi understands that it's good PR and that they probably got a sales spike from prospective creators buying comics to research the characters, but even so, he was impressed that Top Cow (or, specifically, editor Matt Hawkins) would take the time to run this kind of thing. It is admirable to see established comics publishers trying to engage with aspiring creators (apparently there were around 1100 entries!).

Anyway, mainly as an exercise in writing to a brief, Alexi decided to enter. He enjoyed the challenge, and produced a script (a slightly offbeat little story about pigeons and second chances) that he was pretty happy with. Along the way, he caught up with reading a variety of recent Top Cow comics. In honesty, Top Cow was not a publisher he had been paying much attention to in recent years, but he enjoyed catching up with their output. One title in particular stood out as excellent - David Hine and Jeremy Haun's new take on The Darkness, which is very human and engaging yet delightfully creepy and unsettling. If you're interested (and you should be), Alexi would point out that you can read the complete first trade for FREE here (legitimately)! Very much worth a go.

THREE! Alexi is currently getting involved in the Newcastle Science Comic, a fascinating project that will use COMICS to communicate SCIENCE to KIDS. Huzzah etc. Alexi is not exactly sure what form his direct creative input will be (if it will be involved at all), but he was recently at a launch event thing and heard a great many extremely interesting ideas whizzing around and is certain that the project is going to be aces.
Labels: blah blah, incoming, not just scriptwriting
Newer Post Older Post Home