Terry Wiley passed away at the weekend. My condolences to all those who were close to him. He was both a good 'un and incredibly talented, it is a sad loss to the whole UK comics scene.

Terry used the acronym 'IDCM' as his brand for some of his self-published work - 'I Do Comics Me', and of the many folk I've met through Doing Comics, I can't think of many who Did Comics to the extent that Terry did.

I was always in awe of his skill and versatility as an artist and storyteller. His work on the mammoth run of Sleaze Castle (with his longtime creative partner, writer Dave McKinnon), Petra Etcetera (with writer Adrian Kermode) and most recently VerityFair (all Terry) is all highly technically accomplished. Even more importantly, those books are full of humanity, humour, surreal meanderings, highly engaging characters grounded in authentic detail existing in a meticulously detailed shared universe, frequent background in-joke nods to comics and friends, and sheer undeniable originality.

Although well-loved by pretty much everyone who's read them, I think these works still have yet to reach the wide audience their quality deserves, probably partly due to the hard-to-categorise-ness that is an element of why they're so great (and probably also partly due to Terry's modesty and bad-at-self-publicity-ness that was a small element of what made him so great). Nevertheless, Terry persisted in Doing Comics: continuing to constantly make excellent work for all kinds of projects, and being an active member of a number of creative communities - including the Paper Jam Comics Collective, where I met him.

I couldn't claim to have been very close to Terry, but it was a pleasure to have been his friend. His occasionally mock-curmudgeonly veneer fooled no one, his charm and cheeky wit always apparent. He was funny and passionate about comics, particularly self-published ones, and having someone like Terry in the gang always made us feel confident in what we were doing.

I was also lucky enough to collaborate with Terry on the short project The Sloper Gradient. I'd scripted a short comic about Ally Sloper and the roots of the modern comics medium for a proposed Victorian-era-themed anthology, but it had been rejected due to being way too dense and complex to find an artist to take it on. More than any of my (many) rejected scripts, I thought this one had potential and deserved self-publishing - if only I could find the right artist.

There was literally ONE artist I knew that had the skill necessary to pastiche the numerous different artistic styles required to tell the story, and to get across the human emotion needed to wrap it up. When I rather timidly approached Terry, he was intrigued by the script and took it on, no big deal. It's only a short comic (hopefully at some point, I'll post it on the internet for wider perusal) but thanks to Terry's incredible talent, my baffling script ended up as a comic I was really proud of.

That's how I'll remember Terry - affably able to do pretty much anything in the sequential art medium, because he was just that good at Doing Comics. 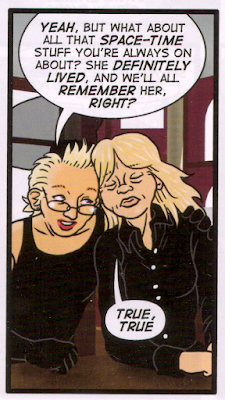 You can get the Sleaze Castle collections on Comixology or in print via e.g. Amazon. (Note: Sleaze Castle is not sleazy, it's a pun on 'Castle Leazes', a Newcastle University hall of residence that the story is set in a fictionalised version of).
You can get VerityFair on Sequential (physically, I think it's out of print, but you can find second-hand copies around).