Alexi talks about the first issue, 'Otto & The Thief', and provides some deeper background to the project.

Alexi talks about the second issue, 'Otto & The Little Helper', and theorises about game and puzzle design ideas, rattling on about ludonarrative resonance and dissonance.

The third and final issue, 'Otto & The Old Friend' is at the printers and Alexi's little story comes to an end. Alexi's going to talk here a little about the issue and about some of the themes of the season as a whole.

As with the prior two issues, it features absolutely stunning cover art by Steve Larder, coloured by Jack Fallows: 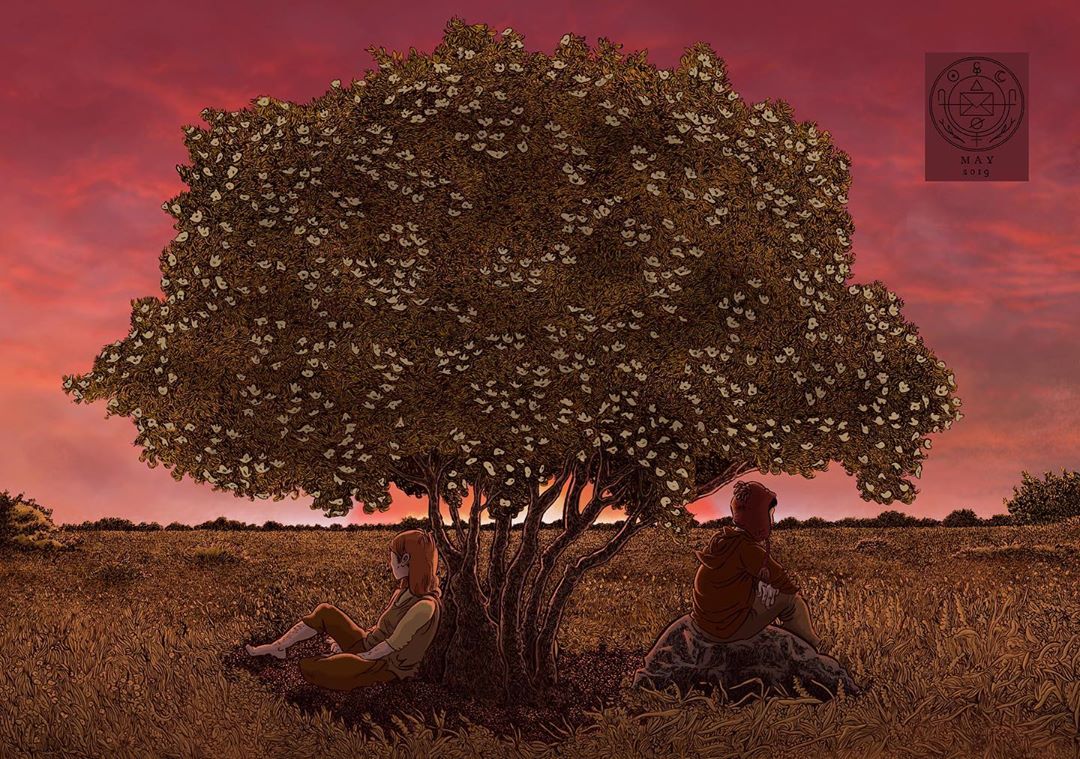 (And the fab interior artwork this issue is by Sophie Robin.)

Reflecting back on it all, Alexi is happy with how the puzzles, story and art have fitted together across the season and is really proud to have been part of Cryptogram Puzzle Post. It may only be 24 pages in three envelopes of final product, but planning and writing The Stone Leaves took over a year, a 15,000-word script (that was rewritten myriad times), and an awful lot of time researching, doodling puzzles, and just THINKING, so Alexi is really attached to The Stone Leaves. It's the best thing he's done. He'd like to thank Jack for giving him the opportunity to play with their amazing project, all the guest artists involved (Steve Larder, Jem Milton, Dave Newman, and Sophie Robin), and anyone who has read the issues and tried to solve the puzzles.

As discussed in the previous blog post, this third issue is themed around moving and moving on. The protagonist Otto has to both make a literal journey and move on metaphorically, in several different ways. It ties up many of the narrative threads raised in the first two issues and links it all to the main Cryptogram Puzzle Post story.

The playlist for this issue hopefully reflects the bittersweet nature of the narrative and the sense of travelling in late Spring (and: sun, water, memory, cycles of life and death, friendship, regret): Brave Timbers - First Light; Alela Diane - Take Us Back; Aidan O'Rourke - An Tobar; Mary Hampton - Island; Colour Haze - Remains; Goldfrapp - Eat Yourself. All tracks appear as part of the main 'Cryptophone' playlist on Spotify, or, for convenience, you can find just The Stone Leaves season tracks here.

Hidden secrets? If anyone can spot a particularly obtuse reference to a North-East-based doom rock band, award yourself bonus points.

Otto's journey is about coming to terms with perceived failure. Having aspirations to do good in the world and for one's actions to have value, it's human nature, but reality rarely conforms to the shapes we hope to see. Other people just don't care or don't see things in the same way.

Otto is perhaps a bit older than Alexi, but Alexi thinks he knows something of what it is to feel old,  and tired, and lonely, and that all one's endeavours are ridiculous and for nought. To realise that efforts have been at best unproductive, and sometimes counter-productive, is hard to take. 'First World problems', sure, but sadness is sadness. If Otto's story is about anything, Alexi would say it's about trying to accept that futility and find some kind of peace - that's perhaps the only practical response to the indignities of life. Hopefully, there's solace out there (or, indeed, in there) somewhere, if the route to it can be found.

So, after all his absurd attempts at doing something worthwhile, his journey has finally reached an end, and at least he can rest.