As has been established:

The first issue, 'Otto & The Thief', came out a month back, and Alexi talked a bit about the background to the project and explained what it was, and how his issues fit into the wider Cryptogram Puzzle Post story.

The second issue, 'Otto & The Little Helper' is coming out shortly. Check out the cover (by Steve Larder, coloured by Jack Fallows)... 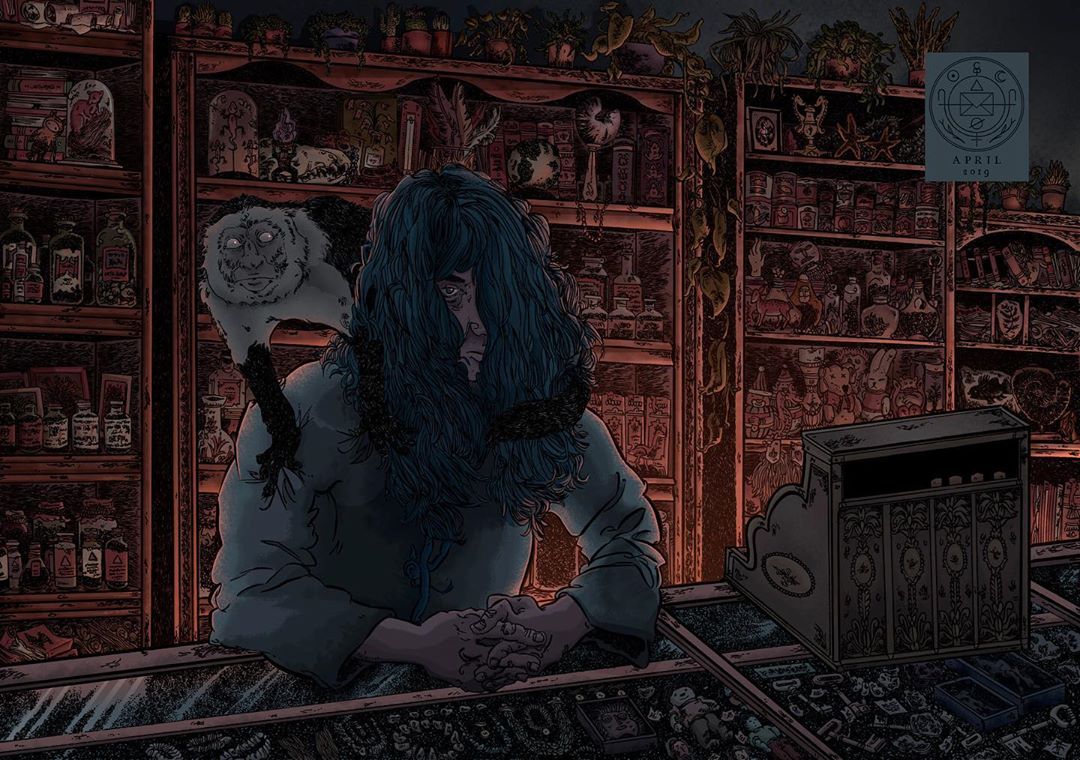 Is that not TOTALLY EXCELLENT? Alexi assures you that the interior art by Dave Newman is also absolutely belter.

What's going on in the story? Otto visits a run-down town to reclaim an object connected with his past. He meets someone who he'd met long ago, remembers a number of events, and has to confront the results of some mistakes that were made.

Second parts of trilogies often seem to share certain characteristics, and 'Otto & The Little Helper' does fulfil several of those: We get much of the substance of the plot.  If the first part establishes the character in the world, the second reveals much of the plot and backstory, and the third will focus on resolving everything that's been set up and making the theme resonate. Tonally, the second part of three is often also the darkest, and that's probably true here too.

Alexi would also like talk about ludonarrative dissonance/resonance. If those terms aren't familiar, they refer (as Alexi understands it) to the extent to which a game's gameplay is incongruous or congruous with the narrative elements, i.e. to what extent does the game successfully replicate or evoke what it purports to be about.

It's a tough challenge to be ludonarratively resonant. Games (of all types) are usually a representation of something else, and it's rarely possible for the game mechanics to be the same as whatever the game seeks to represent - and often, even in games that are enjoyable, this dissonance can be noticeable (in many ways).

Examples! Alexi has recently played one of the Hitman games. It's ridiculous. Your baldy barcoded assassin protagonist rocks up to wherever the 'hit' is in his distinctive suit - without exception. "Agent 47, we need you to do a job at a clown convention..." - maybe prepare by getting a clown costume? NO. Arrive in the suit then mug a clown to steal a costume - which you change into in seconds, fits perfectly and no one questions the fact you look different. AND you magically knows where everyone is in the level. AND success often depends on learning where characters are going to walk, and with what timings, by repeating the level multiple times. None of which realistically chimes with the theme (thankfully), but it does make quite a fun puzzle game in an entirely-divorced-from-reality way.

How about boardgames? Ticket To Ride always springs to mind here. Great game, very enjoyable, but what are you actually meant to be doing? "Claiming" routes - being the first to travel them? But there's no real sense of travelling - you can pop up wherever you like on the map, so it ends up feeling more like you're some kind of rail tycoon, purchasing sections of railways. Dissonance!


Cryptogram Puzzle Post has both puzzle and narrative elements, and the theory is that they work in harmony. However, as Alexi has discovered, this is tricky to structure (the fact that Jack has managed to do this during the past two years' issues is just another part of what Alexi finds astounding about what they've achieved with this project).

If you have your protagonist needing to, let's say, get through a door, and there's some kind of elaborate mechanism, the puzzle could be to work out which lever to pull that will release the door lock. This is fairly ludonarratively resonant - it may not be the same as being stood in front of the mechanism yourself, but it replicates some essential aspects of it.

However! Part of the great beauty of CPP is the fact that part of the puzzle is often working out what the puzzle is. And for that to work, the puzzle often has to be tangential to the narrative, or at least only loosely causally connected to it. If the protagonist stands in front of a door they need to be through and there's a mechanism that releases the lock with multiple choices of lever to pull, working out which lever it is is highly intuitive. If all the puzzles were like that, it would leave little abstract problem-solving for the reader.

Consider the converse: let's say the character must open a door, but there's no obvious mechanism, and the choice of lever is between a metal one, a wooden one and a ceramic one, based on a clue on the previous page where the reader may notice the word 'wood' hidden in a painting (that the character only glances at); plus the wooden lever has a symbol on it, and that's what is of significance in the puzzle on the next page! The mechanism is irrelevant, and the character is acting in an almost Dirk Gently's Holistic Detective Agency way, relying on the mysterious interconnectedness of all things to guide choices, often with the reader acting independently of what the character is doing.

This is ludonarratively dissonant, but Alexi feels it is unavoidable if the mystery of the puzzles is to be maintained. To counter this dissonance, Alexi has tried to theme the types of puzzles in each issue to enhance the more general narrative concepts.

In the first issue, several of the puzzles are about CONNECTION - connecting one thing to another to create a link. Hopefully this has some resonance with the fact that Otto is just starting to connect what happens to his half-forgotten memories.

In this second issue, several of the puzzles are about MAKING SENSE of things - hidden meanings, ciphers, and the like. Hopefully this has some resonance with the fact that Otto is making sense of what he's finding out about his past.

In the final issue, several of the puzzles are about MOVING - changing positions, finding routes. Hopefully this will have resonance with the fact that Otto is moving on and changing his position, literally and metaphorically.

Does it work? If you have thoughts, please let Alexi know. All of this is an experiment.

Bumper bonus issue two stuff!
In this issue, Alexi makes a subtle nod in the text to a classic illustrated puzzle book that one of the puzzles references. Can anyone spot it? One of the puzzles is loosely inspired by the idea of chaos magic sigils, and the two sigils that matter are both based on letters based on words. It's a big stretch, but they might be guessable? There's also a massive quantity of false-answer paths through the whole issue, to the extent that only one location on the map doesn't actually feature in any of the other puzzles - can you work it out?

For the playlist, with this being the more brooding and dramatic part of the season, Alexi has permitted himself a dive into some atmospheric psych-rock, along with some classic unsettling folk oddness. This issue's playlist:
Graveyard - Longing; Tunng - String; Comets On Fire - Blue Tomb; High Priest of Saturn - Ages Move The Earth; Trees - Murdoch; The Budos Band - Turn And Burn. Check it out (currently at the bottom) in the Cryptophone mega-playlist here.

Still unsure about the whole thing? Try the very first issue of Year 0 for free.