It was with great shock and sadness that I heard of the passing of Dave Evans a few weeks ago. There's not much I can add to the many moving tributes already written, but wanted to at least write something about one of the largely unsung heroes of the UK small press comics scene.

I couldn't claim to have been close to him, but it had always been a pleasure and privilege to work with him over the years - indeed, as editor/publisher of FutureQuake Press (along with Richmond Clements), he published the majority of my the comic stories I've scripted - in FQP titles FutureQuake, Something Wicked, Zarjaz, and Dogbreath. As well as an editor and letterer, he was an accomplished artist (I still have several of the little sketches he'd do on squares of paper during conventions) and I was chuffed when he drew one of my stories for FutureQuake himself.

Ever since I started getting into small press comics and going to comic cons, Dave was a fixture of the scene, an unfailingly positive and welcoming presence - to the extent that whenever I arrive at any comics convention, one of my first thoughts is always 'is Dave here? I should pop by for a chat and pick up the latest FQP issues'.

I remember being pretty new to cons, sat in the bar at Hi-Ex in Inverness, and Dave insisting that no one should be sat separately, urging everyone to sit together and join in the chat and doodling; it was a lovely experience, and that attitude was typical of Dave - friendly, inclusive, enthusiastic about comics.

I think Dave published about thirty issues of FutureQuake, plus the many issues of other FQP titles, and I've found myself reflecting on the thousands of people that must have enjoyed reading a comic he helped create - and about the many writers and artists who got a break and grew creatively thanks to Dave publishing their work. 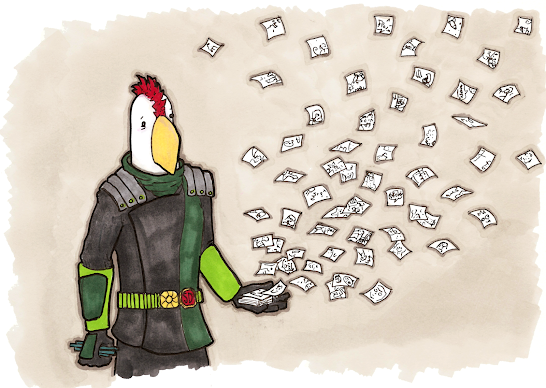