Do you know which comics character was the first to become widely popular, appearing repeatedly in a wide range of stories, followed by a vast loyal readership, inspiring all kinds of official (and unofficial) merchandise and spin-offs?

- If so, Alexi recommends this comic as just the kind of thing that someone with your knowledge of comics history would enjoy.


- If not, Alexi recommends this comic as just the kind of thing that you'll find educational and entertaining as you expand your knowledge of comics history. 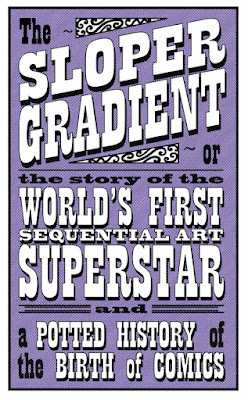 This is probably the most adventurously-structured comic that Alexi has scripted, so it was incredibly fortunate that an artist as sharp and adaptable as Terry came on board to turn the barely comprehensible plans into reality. If you haven't read Terry's genre-defying work (like VerityFair and Sleaze Castle), Alexi urges you to at your earliest convenience - it's funny, human, charming, splendid stuff.

The comic can be obtained from Alexi or Terry (who will both be around and about at Thought Bubble festival this weekend).
Labels: shameless promotion
Newer Post Older Post Home