The Stone Leaves Part One


The three-issue season is called The Stone Leaves - the first issue of which, 'Otto & The Thief' should be ready very soon!

Here's the cover by Steve Larder (with colours by Jack), and a preview of the interior illustrations by Jem Milton. 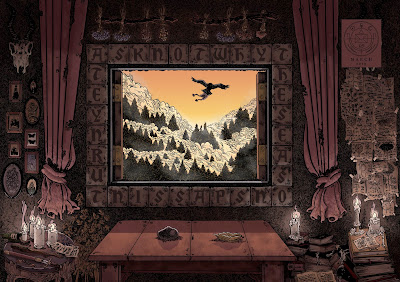 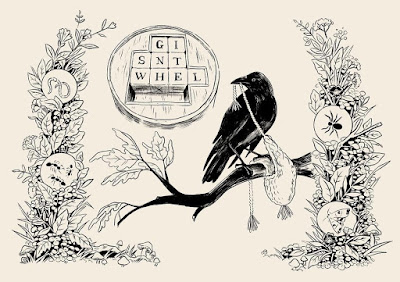 HOW AWESOME IS THAT LOOKING, EH? Alexi has been delighted to work on a project with such talented guest artists.

Alexi has been a massive fan of Cryptogram since the start, so when Jack raised the idea of some guest issues at the start of the third year, Alexi was both tremendously excited, but more than a little intimidated at the prospect of trying to match such ingenuity and such a distinctive tone that Jack had created.

The first two years of Cryptogram have followed protagonist Anna as she finds and joins a coven, then goes on a perilous epic quest. The start of the third year seemed a suitable point for a brief change, so The Stone Leaves switches to follow a new character, Otto. He's old and tired, and, whilst perhaps formerly skilled, his memory is not what it was - so he can face challenges approximately similar to Anna (who's young and has grown in skill and confidence through the series), but from quite a different perspective. It also seemed like a good opportunity to try and fill in a little of the backstory to the main narrative.

Using Otto took a bit of the pressure off from trying to seamlessly match the other issues, and Alexi has enjoyed tweaking the tone a little. However, it still left the challenge of establishing a new character, developing a narrative arc, illuminating themes, working in backstory elements, and connecting to the main plot. Oh - and constructing a series of totally ingenious original puzzles, themed around witchcraft, that delight and confound the reader. All in the space of seven pages per issue (plus intro page and illustrated envelope)!

All creative endeavour is a puzzle of sorts, but the intricacies of interaction between character / plot / references to magic and folklore / puzzles whose outcomes are the key to solving the next page's puzzle, and which structure over three issues into something vaguely coherent? One of the biggest challenges was working out where to start building from. What was essential and would could be changed? (But if it was changed, how did that affect the next element, and the next, and the next!?)

How does Jack do it (and doing all the art and business side) every month? It is a mystery. Alexi knows they are a ridiculously talented creator (and general good 'un), but it just doesn't seem humanly possible. (Aha, "not humanly possible", EH, READERS?*)

Anyway. It has been slow progress, with much rumination, but with 'Otto & The Thief' now at the printers, Alexi is tentatively thoroughly excited about the whole business.

Secret insider bonus blather!
Otto's name is not a reference to Aleister Crowley's Ordo Templi Orientis ('Otto' is just another four letter palindromic name like 'Anna' which seemed a nice symmetry). At an early point in the script development, the crow was going to be called 'Hotfoot Crowlie', but that was more as a reference to Sybil Leek's jackdaw 'Hotfoot Jackson'. The herbs mentioned in the potion for memory all were associated with memory in Culpeper's The English Physitian / The Complete Herbal.

And each issue has a soundtrack! The compiled mega-playlist for the whole of Cryptogram is on Spotify here. Scroll to the bottom of the list and you'll find what Alexi selected after digging through his mountain of CDs whilst writing the issue:
Bert Jansch - The Waggoner's Lad; Mr Scruff - Valley Of The Sausages; Nostalgia 77 – Green Blades Of Grass; Bill Fay – Garden Song [demo version]; Elle Osborne - The Way Through The Woods; Gila - This Morning.

Alexi wanted to mix some nature-oriented psych-folk with some slightly wonky jazz antics to reflect the themes of the issue: confusion (and a slightly absurd chase), nature (and the start of spring), and making connections (between experience and memory, and in the puzzle functions).

Enough of that for now! There'll be more talk about puzzles and themes when the second issue comes out (warning: this may refer to "ludo-narrative dissonance/resonance", so if your pretentiousness alerts go off, you've been warned.)

The Stone Leaves season of Cryptogram Puzzle Post runs in March, April and May 2019. You can order the season here (along with various options for individual issues and bundles), but why not consider subscribing to the Cryptogram Puzzle Post Patreon - you'll not only get the issues but also a load of bonus content including behind-the-scenes process posts and exclusive puzzle challenges! (If you know Alexi in person, he may have a few copies too, but going via the official channels are the most reliable methods.)

(If you think "sounds pretty interesting, but eight quid maybe seems a little pricey for just a few pages", Alexi gets where you're coming from, but you clearly haven't comprehended what Alexi has been trying to explain about the sheer volume of planning, design, writing and art that goes into these issues! Plus: this is almost totally unique. If the idea of enigmatic interlinked puzzles in an intriguing story with lovely art appeals at all, then an issue of Cryptogram Puzzle Post represents amazing value for you. Give it a go!)

Next: Part Two and ludonarrative resonance and dissonance.


* Alexi would like to make it clear he is not officially suggesting that Jack is a supernatural being, he leaves any such supposition to the judgement of you the reader.
Labels: puzzles, shameless promotion
Newer Post Older Post Home